Just a quick note with some news! I am now a featured author at Author Shout.

Check out my new profile page: 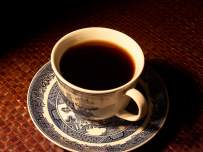 If we were having coffee, once we got all nice and settled into our (hopefully) comfy chairs, I’d have to ask you the question.

Well, let me digress for just a moment.  The week began with me starting to work through the edits on my latest novel.  It’s only my second book, so the process is still a bit awkward for me.  I mean, I take direction and corrections quite well and, God knows, I, have, a, problem, with, commas.  But my editor zinged me on my use of what I thought was a common colloquial expression.
My character, I said, ate with a coming appetite.  This was part of a narrative section.
She retorted:  WHAT KIND OF APPETITE?

At first, I thought this was absurd, but I also trust my editor so I did some research.  I found only a few references, but at least there were some.  I was relieved to find out that it actually exists; I’m not totally crazy.  Heck, there is even a blog with “The Coming Appetite” as the title, but it was obviously not as common a phrase as I presumed.
Perhaps it was regional, I thought.  I’m from Texas originally, so I asked on a popular Texas-oriented FaceBook page and my query generated an enthusiastic response.   Ninety-five percent of the responders had never heard of it. I was deflated.  Still, there were a few points of light.
What is it supposed to mean?  It means you didn’t think you were very hungry and perhaps began to eat by just picking at your food but as you started eating you found you were hungrier than you thought, so your appetite comes on after  you begin eating.

So … after another sip or two, I would ask the question:
Have YOU ever heard the expression?
Oh, my character?  I rewrote the sentence … it turns out he was pretty hungry after all.

I’m not giving up on it, but I will likely work the term into dialogue somewhere, where it belongs.

Thomas Fenske
http://www.thefensk.com
P.S.  Keep an eye out for the new novel, A Curse That Bites Deep, due out this fall.
Oh, don’t worry, I’m sure to mention it over coffee sometime …

Somebody asked me the other day about the headline on my website:  “Not Just Another Lost Gold Mine Story”

Well, beyond the obvious answer (it isn’t!) … there is a story behind the comment.
I had entered The Fever in a contest where the winners would be considered for distribution to movie and television producers. Hey, I thought, The Fever would make a great movie! In fact, when I was first attempting to write the story, I seriously considered doing it as a screenplay instead. But in the early days I was just as successful in avoiding writing a screenplay as I was in avoiding writing a novel.

Anyway, one aspect of this contest was that they would give you feedback on your submission. They did. They pointed out that it looked like a good story and all but it seemed to be “just another lost gold mine story.”

“Great,” I thought to myself, “I knew I should have rewritten Freaky Friday instead!”

Oh, I’m fairly pragmatic about such things, and saw this feedback as more of a problem with my submission materials rather than the quality of the work itself. I think submissions like this are a bit like grant writing, there is an art to it and it is a skill I haven’t quite mastered, along with writing book blurbs and good headlines I guess.

But there you have it … I wanted to emphasize the fact that it ISN’T just another lost gold mine story. The hero Sam realizes he has become stagnated and his isolation is holding him back. He finally figures out that he HAS to change or he’ll never find what he’s looking for.

I think that’s good advice … I probably need to change the headline and blurb to something new before too long.

I guess I’m still learning this blogging stuff but one thing I have managed to figure out is that it needs a catchy title.  My original title, “Thomas Fenske, Author,” although descriptive, ironically lacked originality.  Then one day I thought about my first web page, cobbled together by hand back in 1993. “Okay, You’re Here, Now What?” was the banner that splashed across the page and it reflected my awe at arriving on the web scene … Basically all dressed up and no place to go (well, except everywhere).
Back in the very early days of the wild wide world of webs it seemed oddly appropriate, but after I changed it to that name here, well, it was too long. And it didn’t make as much sense now. Note to self, your own private jokes often don’t play well to a crowd. Twenty five year old jokes even less.

Still, I needed something in that spot so I tried just shortening  it to “Okay, You’re Here” and that made even less sense.  Sigh.

So I revisited the problem and  came up with “A Smidgeon’s Toll.” Yeah, it still doesn’t make a lot of sense but at least it is hopefully intriguing. And it has some bearing on my published and soon-to-be published writings.  You see, Smidgeon Toll is a major character in both books and should have an even bigger role in a planned third edition of the growing series.  She’s the short, spunky, outspoken owner of a cafe that has a prominent place in both books. Her name came from her grandmother who blurted out, “Why, she’s just a smidgen of a thing” the first time she saw her as a tiny baby.  Smidgeon is just an archaic (quaint, right?) spelling of the same word.

So, we’ll see how this one goes … unless I change my mind again.
What do you think?  Do I need to change the title again?

Two reminders: You can get more information on my novel The Fever at http://www.thefensk.com  and I am still hosting a giveaway for one Kindle copy of The Fever at Amazon: https://giveaway.amazon.com/p/de2b8b0acbf85b6f

If we were having coffee, it being National Donut Day weekend, I’d be inclined to read you a passage from The Fever, about a legendary Austin donut shop:

“The aggravation of Austin’s rush hour traffic spurred Sam to make a side trip on the way to work. Mrs. Johnson’s was a doughnut shop that had carved a niche in the collective appetite of Austin. If he drove past the shop late at night when the hot doughnuts were being freshly glazed, the aroma would permeate the air with a sweet and luscious fragrance that was impossible to ignore without stopping.

“My car starts shaking and then automatically pulls in,” he would joke to friends.

Despite its reputation, the store itself was not impressive. It was a low-slung frame building with peeling paint and a parking lot that resembled the lunar surface.

“A dozen glazed,” was his order. The clerk sauntered over to the production line and pulled his order from the warm doughnuts that were resting after being glazed. As he carried his prize back to the car, he savored the irresistible aroma and could feel a gentle warmth radiating from the box.”

More information on The Fever: http://www.thefensk.com