Pick up a good book and start reading.

Well, I can think of one to get you started …

Today’s winter storm along the east coast reminded me of a scene I depicted in The Fever … Sam, the hero, is caught driving across most of the state of Texas in a horrible ice/snow storm.  One reader told me it was one of her favorite parts and that while she was reading she had to get up and put on a sweater because the description of the cold gave her a chill.

For me I drew upon several experiences where I, for a variety of reasons, found it necessary to drive hundreds of miles in an icy mix-master of weather.  Sometimes you just have to keep going, following the track of the vehicle ahead of you, hoping some overconfident fool in an SUV, who doesn’t realize that four wheel drive means nothing on ice, goes out of control and smashes into you.  I drove all the way across South Carolina that way once — 30 mph the entire way.  Ninety percent of the cars I saw either smashed or 100 feet off the road in a field were SUVs.

My best advice is to stay home, stay warm, and read a good book like The Fever — of course, in that case you might need to keep a sweater handy!

Don’t forget, the Kindle and Nook versions are ON SALE now, only $3.99! 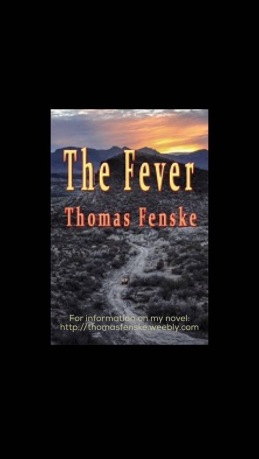 Well, here we are two weeks into the new year … I guess it has finally hit.
So … Happy New Year?   Yeah, right.

I just got the royalty report on my novel’s first six months.   Well, that was a bit depressing, but hey,  I already knew that a first novel was going to be tough going.   But I didn’t know it was going to be this tough.  So I did what any self-respecting author would do … dug in and did a lot of work on the next one.  The sequel to The Fever is coming along nicely.

I did just complete a facebook ad campaign, the most successful one to date.  I’ve run a handful of them in the past.  Well, if success can be judged just by numbers.  Still, according to facebook, I got some information about the book in front of about 3,000+ people.  And 173 post engagements … like  people clicked the ad or liked it or shared it … all the possibilities listed in the ad manager.

If you are interested, here’s the link to my web page:
http://thomasfenske.weebly.com  … where I have links to all the pertinent sales sites.
All ebooks now on sale for $3.99
Amazon has a paperback at $13.95 …

Years ago I worked a second job in a convenience store for a while.  At that time, the thought crossed my mind that Shakespeare had to have worked at the Elizabethan equivalent of a convenience store … one manages to see a lot of life from behind that counter.  Here’s just a snip from my catalog of convenience store stories.
There was a notorious bad check writer who haunted our part of the county back then.  Her father was a respected businessman and she wasn’t above dropping his name if she thought it would help, but he didn’t bail her out of her checks.  She’d cruise different stores and if she noticed somebody new working at one of her haunts, she’d ply her trade.   I once noted that the grocery store down the street had a note taped to every single cash register with her name written boldly.
She must have made a mistake this one night and didn’t recognize me–I had worked there a while and had been caught by her on my second shift.  The owner gave me a ‘bye’ on that one, but said that was the only one.  She pumped gas and came in and tried to pass a check.
The woman pumped gas and came in and tried to pass a check.
“I can’t take it.”
“Why not?”
“You KNOW why not.”
“Well, I’ve pumped the gas, so whatcha going to do?”
I sighed.  It was about 6:30 and I really didn’t want any hassle on my shift.
I said, “You come back with the money by ten and I won’t call the cops, but I call at ten sharp.”
She turned and left.   She owed like nine bucks for the gas.
Big Jimmy came by after a while to keep me company.  He used to work there but he still liked to come hang out.  His name was well-earned .. he stood about 6’5″ and weighed way over 300 pounds.
We were sitting around and talking and here she came, carrying a pizza box.   It was about 9:45.
“How about seven bucks and two-thirds of a pizza?”  She opened the box … sure enough, inside the box was two-thirds of a pizza.  It was still hot.
She opened the box …  and sure enough, there was what appeared to be two-thirds of a pizza.  It was still hot.
I’m thinking to myself “oh my fxxxing gawd ….”   Then I’m thinking, what a pain in the ass it would be to call the cops for three bucks.   And I also realized that the pizza smelled good and I was a hungry.  I had to give her some credit, she was good.
I had to give her some credit, she was good.
I loudly sighed and resigned myself to the situation.
“Okay,”  I said as I threw in the three bucks to balance the register.
Her debt paid, she left and I opened the box and offered some to Big Jimmy.
Big Jimmy gnawed on a piece and said, “The thing I don’t understand, is how did she get a pizza if she didn’t even have the money for gas?”
I think the concept of irony was a little lost on Big Jimmy.
I shook my head and said “Jimmy, Jimmy, Jimmy … she wrote a *check* someplace for it …. “
Jimmy then got it  … .”Ohhhhhhhhhhhhhh.”